The story of Kalin des Vents

While Kalin was in Normandy, recuperating from a bowed tendon, Julia was diagnosed with ventricular extrasystoles and Paroxysmal tachycardia, and had two operations to try to correct everything. After the second operation, the doctors told her she could stop taking her beta blockers, and so she could start show jumping again in competition. Kalin, by that time had spent nearly ten months first in a stall, then a paddock, then a field, healing. He was fat and barefoot, but his legs were perfect – his tendons looked better than they’d ever looked, and he’d gained confidence in himself to the point where Carol, the farmer, put him in the pasture with the young stallions so Kalin could teach them some manners.

We decided to bring Kalin back home, and found a pasture for him at a friend’s farm nearby our house. It was a small paradise, having a polo field, a jumping ring, and all the hay Kalin could possibly eat. He settled in happily, and Julia was thrilled to have her horse back. She was in her first year of prep school now, and had lots of work, but she set aside time  to get Kalin back into shape. 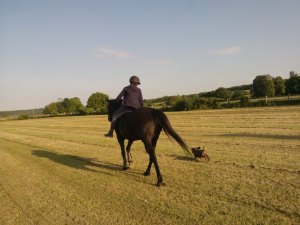 She started slowly, with long walks in the countryside, then trotting on the polo field, gentle canters, and then up and down the hills nearby. We took him to the village nearby, taught him to walk up and down the stairs in front of the town hall, took him to soccer games, to the park, through forests and fields – and that summer he even turned into a wild horse for a month, bucking and running away from us and refusing to be caught. We called this his his “rebel teen stage”, and played with him in the field until he “grew up” and came when he was called. (It only took a bushel of apples and three bunches of carrots).

We decided to keep his shoes  off, and Julia learned to trim and file his feet 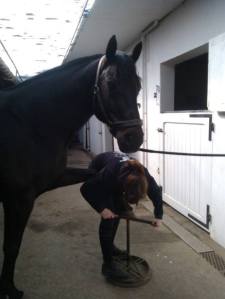 After a couple months, she started jumping him again – first just low bars, slowly raising them until he was sailing over four foot fences – just like before he went lame. Only now, he was jumping even better. He was no longer jumping ‘flat’, he was using his back, tucking in his feet, and jumping ’round’. Maybe it was going barefoot that did it, or maybe it was the work Julia put into muscling him up. She also worked on riding him without a bridle, teaching him to follow her slightest moves. She taught him to bow for treats, and after just a year, he was ready to go back to competition. And so was Julia. 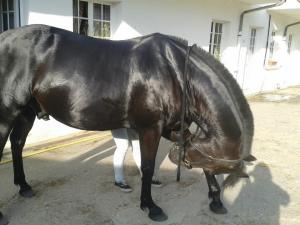 Kalin bows for a treat. 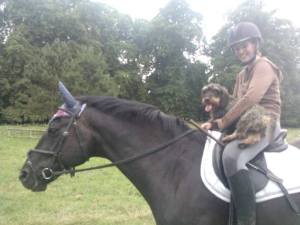 Kalin, no longer the “spooky” horse, with Auguste 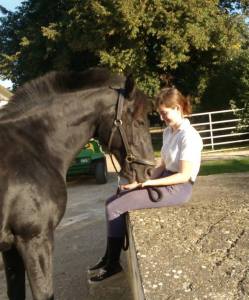 Sharing a quiet moment with Julia