When I first moved to Paris, I lived in a tiny flat on the fifth floor od an old building in the Latin quarter. (no elevator).  We were three young women in the two bedroom flat – it was three levels, downstairs was the bathroom and one bedroom, upstairs was another bedroom and a landing, then up and down a little flight of stairs and you were in a very small kitchen that held a tiny electric stove and an even smaller refrigerator. I honestly don’t remember using any of the pots or pans – we had cereal, milk, yogurt, and orange juice. Otherwise we ate out. It was standing room only in the kitchen – we grabbed a bowl of cereal and sat on the stairs on the landing to eat.

We didn’t have a washer or dryer, so once a week I’d go to a “Blanchisserie”  just down the street – a place that would wash and dry your laundry for a reasonable price. They would fold my clothes and wrap them in brown paper – and I’d walk back home, up the five flights of stairs, and toss everything in the pile that was my “clean clothes pile”.

One day, I went to get my clothes from the blanchisserie, and they gave me my brown paper package, full of all my underwear, a few shirts, my skirt, socks, and blouses. I put it under my arm and started back home.

Let me just make a pause here and say that Emperor Napoleon III decided that for the greater glory and future fame of Paris, he had to modernize it and provide it with up-to-date infrastructure. The job fell to Eugène Belgrand, a graduate of the world-renowned École Polytechnique. Belgrand put in a system that separated water for human consumption and water for other purposes, a highly unusual but extremely far-sighted move.  One of the city’s rivers was diverted to be used as a “gray” water system. The other water would be cleaned, pressurized, and used for drinking only. 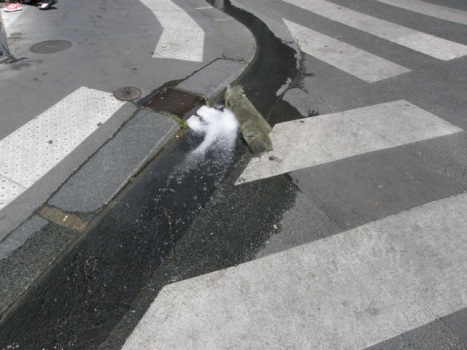 the streets. They use rugs to turn the water this way and that, and sweep everything along with brooms. And I loved to watch them work. The street cleaners in France wear orange or green overalls and carry “witches’ brooms” made of genet (the plant is literally called a broom plant) and wood, although nowadays the brooms are more likely plastic and the same green as their overalls.

Anyway, that day, I stopped to watch the street cleaner as he put his rug down and turned on the water. Soon a stream was gurgling merrily along the side of the road.  He walked next to it, swishing the water with his broom, cleaning the street and sidewalk as he went. I watched for a while longer, then I started on my way again, looking down at the water rushing along beside me in the gutter. Then I noticed something white floating in the gutter. I looked closer, and gasped. It was a pair of my underwear! And it wasn’t the only one! Six or seven pairs of underwear had slipped out of my paper package and were floating merrily downstream. There was a pink pair, and there was my lucky green pair! I started running, trying to catch up to them. They were bobbing along, heading straight for the street cleaner, who started laughing. He neatly picked them up with his broom and carried them over to me. He held out his broom with its dripping burden and gave me a mock bow.

That was the last time I went to the blachisserie without a proper bag to carry my clothes home in!

1 thought on “My underwear float downstream”