Savitri, goddess in Hindu mythology, the daughter of the solar deity Savitr and the wife of the creator god Brahma. The Mahabharata recounts how Savitri used the power of her dedication to her husband Satyavan to prevent Yama, the god of the dead, from taking him when he was fated to die. 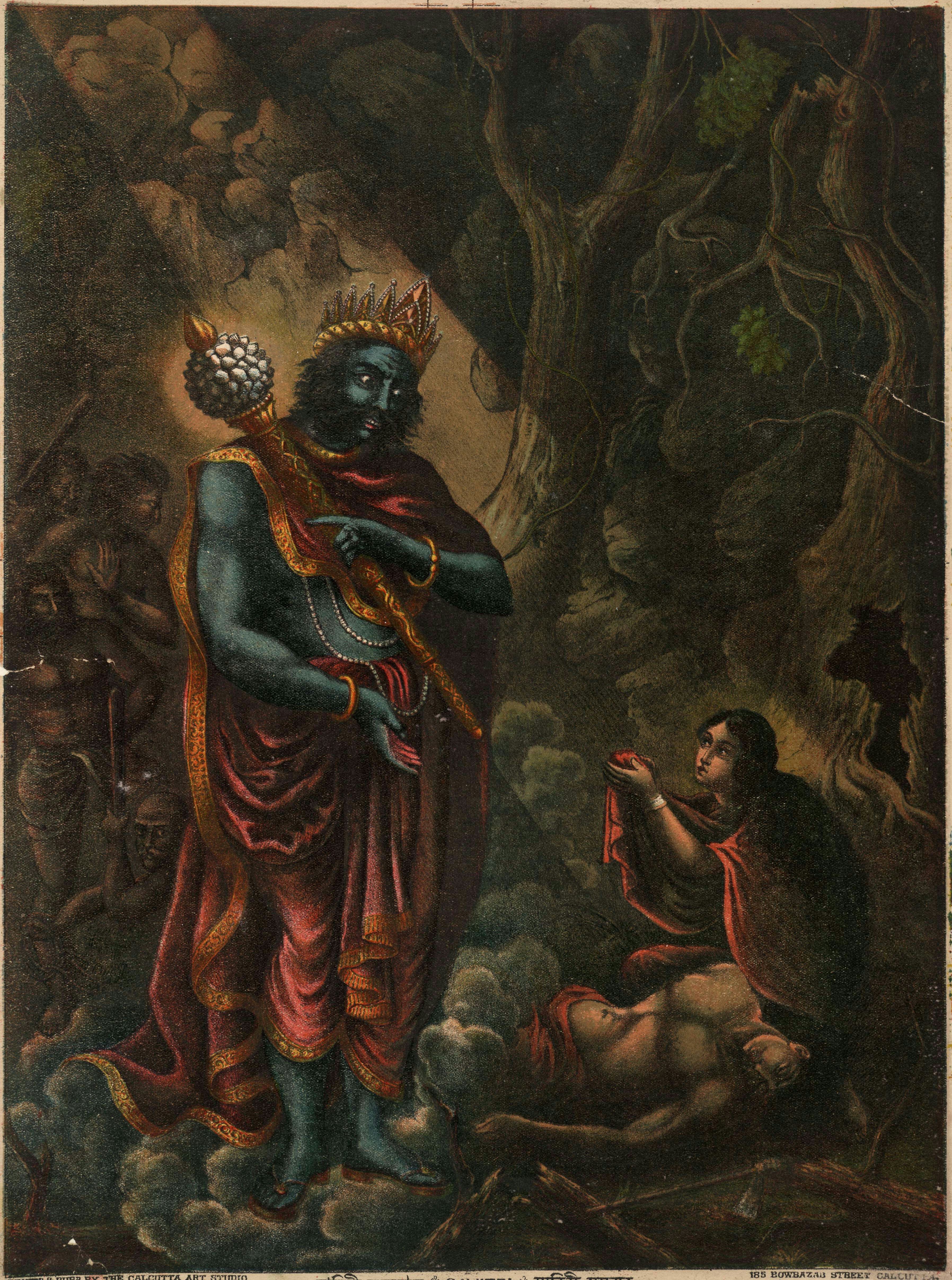 We are the youngest of the plants. Trees are older. Flowers are older. We are grass. We are sugarcane. We are bamboo. We are wheat. Rice. Maize. Our cousins are the palms. And we were made so recently. So freshly. So new…

That we didn’t know what we were for. We are millions, and if you put your ears near the soil you will hear us talking. Chatting. Gossiping. But that is all we did. Until…

He was a king. And his queen and he had no children. So every day he came out of the palace and he walked on us and he prayed to our maker, Savitr. For a child.

And one day, because he was so true, Savitr granted him his boon, and gave birth to one of us, but a human baby of the grass. And because the king recognised where his daughter came from, he named her after us, after our maker…

And so she was Savitri.

And she grew into the loveliest human there ever was. Because, like us, she grew anew every morning. She swayed in the wind but never broke. She was strong and, like us, she was legion.

And when she grew into womanhood she rejected all the princes who came to seek her hand and she said:

So he sent his best men with her and she toured all of India, looking for a man worthy of her. And in the year she was away the God’s Gossip came to the kingdom to speak to the king. He was, of course, Narada, or Naradamuni, as we say, because he never says anything untrue, but he never says anything that does not have mischief in it. He is one of the Seven Sages, but unlike Agastya and others, he never stops talking.
“Your daughter is going to find a husband.”

“That makes me glad.”

Of course they were walking on us, outside the palace, and we heard everything.

“Will she not be well married?”

“She will. His name is Satyavan. He is the son of a king.”

“Except that the king is blind.”

“And his brother claimed he could not keep the throne as a blind man, so he overthrew him.”

“I can understand. But he is still a king.”

“And he exiled him to the forest.”

“Live they ever so humbly, they are still noble.”

“And exactly one year to the day from when Savitri marries Satyavan, he will die. It is written.”

But Savitri heard all this when she returned and said she would marry Satyavan anyway, because he was the only man for her.

“But you will live in the forest.”

“And I will wear bark instead of cloth.”

“And you will have no meat.”

“I will eat fruit and nuts and grain.”

“And your father-in-law is blind.”

“So my mother-in-law and I will be his eyes. As will Satyavan.”

“But Satyavan will die in exactly a year.”

So our beloved sister went to the forest. And of course we told our brethren and sistren, and the cane and the reeds and the bamboos and the other grasses all knew, and all looked after her. We bent, softly, under her feet when she went to pick the fruit. We shed the grain into her hands whenever she needed wheat and rice and maize. And we let her pluck the long leaves from which to weave baskets and a roof covering for their hut.

But she grew more troubled as the year turned around, and as it came back to the day on which she had married. So she asked the blind king and his wife for permission to go into the forest with Satyavan for that final week. And of course, because she was the greatest daughter they could have had, there was no question about it. They said yes. “As you will.”

Even Satyavan, in the glade in the middle of the forest, as we watched and listened, didn’t know why she was there, but knew it was her will. So he said he felt weary, in the middle of the afternoon, and he lay down on us and fell asleep. We knew he wouldn’t wake up again. So did she.

Because, in the shadow at the edge of the glade stood Paundraka, the giant black buffalo, and on his back was Yama, the God of Duty, and of Death. And Yama threw out, like a lasso, a non-existent rope that nevertheless had the weight of the world in it, and it settled over, and through, Satyavan, and returned to him as a silver butterfly, or a pearl sparrow; light and like sunlight on the water; and he tucked it into his lungi waistband and turned Paundraka around and headed off.

Savitri immediately followed. She was wearing her bell-like anklets, but she walked through us and we muffled the jingling sound, so neither Yama nor Paundraka heard her. And then they left the forest but strode by the shore. And the waves slashing against the rocks were too loud for her ghungroos to be heard. Then they went through the sand but she followed by the side, through tufts of us, muffling the jingling yet again.

Until finally they came to bare rock, heading for a cave of blackness, the entrance to Pataal, the Underworld, land of Yama. And there her anklets jingled loud and clear and Paundraka stopped and raised his head and sniffed. And Yama turned his head and looked around.

“Who are you and what are you doing here?”

“You may not have your husband back. This is his fate. It is written.”

“You are my friend.”

“Yes. You are right. And it is my duty as your friend: I will not allow you to ask for your husband back, but I will give you a boon. Ask.”

“Let me father(-in-law) get his sight back.”

And Yama and Paundraka turned back toward the entrance to eternal darkness.
Jingle, jangle, clang, went the anklets following them.
And Yama turned around, but now he was frowning.
“I gave you your boon. Why are you still following us?”
“I am not following you, my lord. I am following my lord. My husband. My Satyavan.”
“You may not ask for him back. The fates have cut his thread. Go now. Because you are my friend seven times over I will give you one other boon. That is all.”
“May my father get his kingdom back.”
“It is done.”
Jingle, jangle, clang…
Now when the Lord of Death turned around his visage was darker than black. All light and sound ceased. The world turned to waiting thunder as he lowered at her.
“Why are you still?!”
“I am following the man I love.”
“You may nbot come with us. I will give you one more boon but that is all.”
The darkness, as though a lantern of blackness had been lit, surrounded them all.
“May my father have ten grandchildren and a hundred great-grandchildren.”
“It is done. Now go.”
Jingle, jangle, clangle, clink.
“What now?!” Death thundered.
“How will I give my fathers any grandchildren without a husband?”
And then the darkness broke as Yama sat back on Paundraka and laughed.
“Well done. Well done. You have outwitted me and I will speak to the Fates and tell them that this is one time when their will, will not be done.”

He opened his hand and a feather, a reflection of sunlight from steel, a white sari being dried in the sunshine by flapping, flew across the rocks, over us, into the forest and towards the glade. And our beloved sister, daughter, friend, Savitri, ran after it, like a flying fish skipping over the water. But Yama stayed us.

“You hushed her anklets so I couldn’t hear her.”

“We’re sorry Lord. But she is ours. We couldn’t do otherwise.”

“I don’t blame you, But I lay this duty upon you: you did not, until now, know who you were, or why you were. Now you do: you, the grass, are witnesses to Savitri. You will tell her story so that all will know what a wonderful sister you have. Individually you are ephemeral, but as long as you tell her tale, you will never die out. That is your purpose. That is your meaning.”

And in the glade Satyavan awoke and gazed at his wife. He just knew he had spent the afternoon asleep. But he also knew that something, he knew not what, had happened.

So she put her arm around him and walked him home. Where the soldiers and ministers had come to welcome the king and re-throne him. And there was laughing and singing and gaiety, and Satyavan and his parents were amazed, and Savitri just smiled.

And Satayavan’s mother called Savitri to her.

“You have had a long day, I know. They have brought cooks: you need do nothing. Take yourself away for a while to rest. Go into the forest and restore your strength: you have earned it.”

Savitri came away from the forest hut and laid down on us and we made a bed for her. And then as she slowly stretched out to make herself comfortable, we started to whisper to her. We told her the story we will tell you if ever you lie down on us, and listen closely. In the hush, from the rice, the cane, the reeds, the bamboo, the wheat, the maize. From your lawns. Just listen to us. Closely. And we will tell you who we are, and why we are: the story of our sister Savitri. That is our meaning. Just listen…