My guest today is Jennifer Macaire.  I invited her to join me on this blog after reading her novel The Road to Alexander, a timeslip novel about a journalist in the distant future who travels back in time to interview Alexander the Great.

EJ  I must confess, Jennifer, that I do not usually read time-travel novels.  They make it all seem too easy, with no technical or philosophical problems.  But time travel in The Road to Alexander seems worse than a major operation, complete with pre-op and anaesthetic.  It was so realistic I am convinced you are a time-traveller – but I suppose you can’t admit it or you will be ‘erased’.  Is that so?

JM Actually, I’m free to tell anyone. Nobody so far has believed me! As long as I don’t do anything to change the future, there’s no risk.

EJ  I believed you arrived in the present era in the United States but have since lived in many places.  Can you tell me something about this and what you did in all these settings?

JM I arrived in NY, in 1960. I next stopped in California, and after that, Samoa in the Pacific. During that time, I masqueraded as an infant. My parents were teachers and loved to travel. We  lived for a while in the Caribbean, then I flew to NYC where I posed as a model. I travelled to Paris, where I hooked up with a polo player. The polo circuit took us from Florida to England to France to Argentina for a while. When our children were born, we decided to settle in France and that’s where we are now – well, except for a few voyages from time to time – or to some time or another.

EJ   That all seems too glamorous to spend your time writing.  What moved you to become a novelist?

JM It isn’t easy to hold a job down when you’re travelling so much, so I started writing when we were in Argentina. We were hours away from any town, in the middle of the pampa, and the twins were small. I had a lot of free time because my husband was often gone days at a time looking for horses. I wrote my first stories there – on the back porch, watching the twins play in the garden in the shade of the eucalyptus trees. At night we slept in a room room heated by a softly crackling fire and lit with oil lamps. We had no electricity, but we had running water. On the estancia were ponies, sheep, and cattle; and we could see deer, burrowing owls, and wild ostriches in the plains. It was magical, like time travelling to a different century. Nowadays, while working on my writing,  I work part time as an assistant in a dental office here in France and, thanks to the wonders of modern technology, part time as an assistant to a researcher in Australia.

EJ   Did you have difficulty finding a publisher?

JM I did! It surprised me, because I’d been writing and selling magazine articles and short stories, and I’d naively thought that a time travel book would be easy to sell. It might have been, but it wasn’t “romantic” enough, oh, and there is a threesome because Ashley falls in love with Alexander’s lover, Hephaestion. It’s not serious enough for a history book, and it’s kind of funny. So, yes, it was rejected by at least ten publishers and twice as many agents. One agent asked for the full series. I printed it up and sent it in a box the size of a volkswagen. I never heard from her again. I suppose she used the manuscript as a table for a while. It seemed odd that she asked for the whole series and never wrote back until I re-read her letter and saw she just wanted a full manuscript – of book one. Did I mention there are seven books in the series? I sold the series to a terrific outfit in Australia, which published books 1-3 and then folded. Meanwhile I kept writing and sold a few more books. I have a pen name and write erotica. But this series has always been my favorite, so I was thrilled when it was accepted by a publisher in the UK last year.

EJ   Have you always been interested in the Ancient World?  Did you know a  great deal about Alexander before you started work on your trilogy?

JM My mother is a history teacher and I’ve always been interested in history. I didn’t know much about Alexander the Great, but I’m keen on research, so when I decided to write about him, I researched for nearly a year. I had piles of information, most of which I didn’t use or got chopped in editing (note from editor: Jennifer, you’re being pedantic again…)!

EJ    Do you think you would have fallen in love with Alexander had you met him  – indeed did you fall in love with him?

JM When I met him, he was just starting his “great adventure”, as he calls it. He was young and brash, and had an incredible charisma. I think, if I were Ashley, I would have fallen under his spell. It’s undeniable that he was someone special – I often wonder what the world would have been like had he lived to govern Persia, Egypt and Greece. What would have happened with Rome? Would he have gone to Africa, as he’d dreamed of doing? He was quite simply capable of anything. It’s hard to resist someone with such energy and optimism.

EJ   Your books are quite playful in the sense that they play with history rather than re-living it.  Have you ambitions to be a more serious historical novelist?

JM I would love to try my hand at a more serious historical novel, but I’m afraid I’m more of a science fiction writer. I did write a book set in the time of the Crusades, but again, it’s a time slip. I can’t seem to get around that. Putting a modern person back in time is an interesting way to perceive the distance that separates us. One author I admire immensely is Connie Willis. Her “The Doomsday Book” is one of my favorite time slip novels. She’s a science fiction/history/romance writer, which is more in line with what I love to write.

EJ  What are you planning to do after the Alexander trilogy?

It’s not a trilogy. It’s a septology! Book III is due out in September, and book IV will appear in December if all goes according to plan.

EJ   Can you tell my readers where they can find out more about you?

EJ    Thank you, Jennifer.  My review of The Road to Alexander should appear in the November issue of Historical Novels Review and on the Historical Novel Society website.

JM    Thank you, Edward! It was my pleasure! 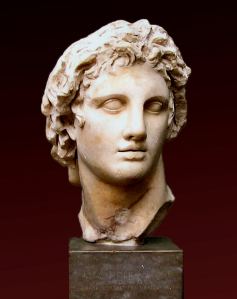