Someone asked me recently what it felt like to be told I was beautiful. The question is hard to answer because everyone likes to be appreciated, and beauty is something that we all seem to value. But at the same time, beauty is fleeting and only skin deep, so it’s the kind of compliment you can make to someone without really caring about the person.

When I was growing up, I was gawky and painfully shy.  I was not beautiful as a child. I was not particularly interesting or smart or athletic – I mostly had my head in a book, or was dreaming about horses. I could care less about my looks, I just wanted to ride horses.  So becoming beautiful was more of a shock than anything else.

Telling me I was beautiful seemed to be the easiest way a boy had to ask me out on a date – as if the only thing that counted was that I looked good with him. I didn’t hear the expression “trophy wife” until many years later, but it reflected what I thought a lot of times when I was out with a boy, and I understood that I didn’t interest them in the least – the only thing they saw was my body. If I had the temerity to say “no”, I usually made an enemy, and I can remember one humiliating night when I stepped into a bar popular with my friends, only to have the guitarist stop playing and announce over the microphone that he wouldn’t continue unless I left – I’d dared turn his friend down for a date. So I was not expected to have any opinions about who I dated. 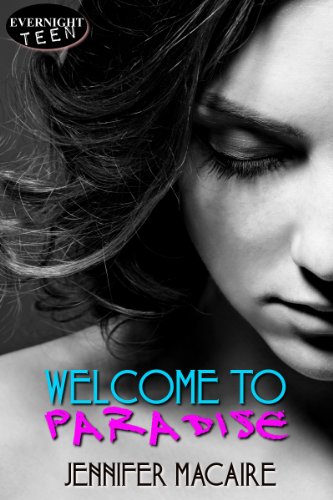 Teen years are boring, so I’ll spare you the sordid details – but you can read “Welcome to Paradise” if you like, a coming of age story about a girl in the Virgin Islands. I wrote it from memories of growing up on a tropical island although it’s mostly fiction…

When I went to NY, after graduating, I worked at my first, disasterous job and became the first punk in New York City.  When people told me I was beautiful, I mostly ducked and ran. Beauty was something you had, but couldn’t share. A compliment about being kind, smart, or generous – those were things that you could be proud of because you’d worked at it.  When someone tells you you’re beautiful, it sets you apart, and I hated feeling isolated, even because of a compliment. If I was with a group of women, and a man made the compliment, the other women would look at me differently. When I started modelling, I was suddenly in a world where nearly everyone was more beautiful than I was. Often, when I arrived at a shoot, the crew would take me for the makeup artist, or for the hairdresser. I rarely wore makeup outside work. Most models, I discovered, wore no makeup when they weren’t working. They were the first grunge girls – models were grunge long before it became “in”. It was a way of deflecting attention.

In a shoot, the model is on the bottom rung of the ladder. Everyone’s opinion counts except the model’s. The photographer, the art director, the makeup artist and hair dresser – they all have their say. Only the model is silent, like a piece of clay or blank paper, waiting for the inspiration of others. Once I opened my mouth to suggest something, and the photographer looked up and said, “The model speaks! What is the world coming to?” Everything from my outfit to my hair style, to how I had to stand, walk, sit, or smile was decided by others. I always had a book in my bag, or a notebook where I wrote notes, poems, short stories – but I had no confidence in myself – I was sure that everything I said or wrote was stupid – models were stupid – everyone knew that. The only thing redeeming about models is their looks. After a while, it begins to wear on you. Especially when I started to date (my husband), and his family told him, “You can’t go out with her – she’s a model!” They had pinned higher hopes on him than a dim witted model – and an American at that!

Models come off badly in fiction – the pretty girl is always the snobby one, or cruel,or empty-headed. So after a while, I stopped telling people I was a model. It was just a job to me – and not a particularly interesting job at that. On location, we were up at 4:30 or 5 am to get makeup and hair done – we couldn’t go out in the sun, we couldn’t wear clothes that left marks on our skin (tight socks, sleeves, watches…), we couldn’t show up with dark circles under our eyes from lack of sleep, or put on any weight. It’s not the glamorous job everyone thinks it is – and no, we don’t get to keep any of the clothes! (In all the years I was a model, I only got to keep a hat and a bra). Most of the time we have to do our own hair and makeup, and more than half the time, we never see the photos we posed for – they come out months later, and we’ve already forgotten about shooting them. And that’s like beauty. It’s here today, gone tomorrow, so in a way,  it’s nice to have taken advantage of what God gave me for a little while, at least!

2 thoughts on “In the eye of the beholder”