(This blog post is from my author friend Tom Williams’s blog, whose books “Burke in the Land of Silver“, and “The White Rajah” I read and highly recommend for historical fiction & adventure lovers!)

From Tom’s blog: Frustratingly, I am in that gap between leaving Accent Press and having my books published by Endeavour. If you live in North America you can buy my stuff through Simon & Schuster – and I’d really appreciate it if you did. If you are in the rest of the world, though, you’re probably going to have to wait another month or two yet. This makes the business of producing a weekly blog a bit strange, but I know that hundreds of you do read it every week (thank you!) and I don’t want to disappoint. So right now I’m throwing my blog open to some other writers who I think have interesting things to say.

This week it’s Jennifer Macaire. I hope you enjoy her post and that, at least until you can buy my books again, you go out and get her Time for Alexander series. It really is good. 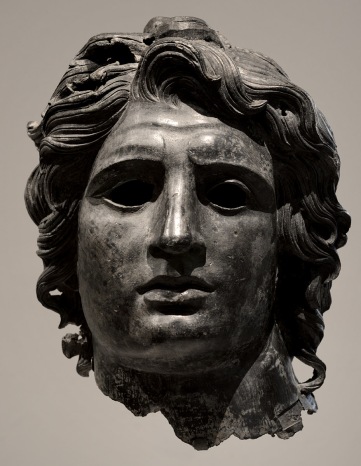 Hi Tom, and thank you for inviting me back to your blog! As you know, I wrote a book on Alexander the Great. Well, it was a fiction book, and he was one of the main characters. I thought (smugly) that I knew a lot about him, because I’d read some biographies, a few of Aristotle’s quotes, skimmed over The Anabasis of Alexander[1] by Arrian, and read several fiction books about him including the fantastic Mary Renault series.  Plutarch wrote the most fascinating biography[2] nearly four hundred years after the conqueror’s death, and his research seems to have been meticulous. But Plutarch was Greek, and for the Greeks, Alexander would forever be an upstart barbarian.

With that in mind, I started a short story. But I was not happy with the idea I had of Alexander. For one thing, there were many discrepancies in his biographies, and the biggest problem, for me, was that most accounts were written centuries after Alexander’s death! I put aside my short story and started researching in earnest. Who was this person? Why did he go so far into India when he’d already captured the crown of Persia? Why go against his generals’ wishes and drag (well, lead) his army across Persia to the Caspian Sea, into Iran and Bactria, into India as far as the Ganges, then down to the Indus Delta, along the barren coast and desert to Persepolis? It was as if he never really wanted to go home and rule, but go back home he did, where he died soon after. His character came to me by reading between the lines. A warrior, yes, but a dreamer as well. An eternal student and tourist at heart, charismatic but short tempered. A brilliant tactician and energetic, but prone to ill health. His friends loved him, his enemies hated him, but no one was indifferent. He was superstitious and religious, yet he defied the gods. He was a conundrum, and he made a wonderful fictional character.

The character I needed was larger than life, (even Alexander’s enemies admitted he was amazing). It wasn’t hard, therefor, to create a sort of demigod. But Alexander’s faults were important too. He was, according to Plutarch, ‘choleric’ and would drink excessively. The more I studied him, the more the idea occurred to me that if time travel existed, he would be one of the people time-travelers would be most eager to meet. And so the idea was born – a time traveler would go back and interview him, and then he’d do something that would inadvertently change time. Fun! I started writing but within a few pages I realized that my first idea of a male journalist would not work. For one thing, a man would not fall under Alexander’s spell as easily as a woman would. Men, I discovered as I researched, were, well, a tiny bit jealous. It crept into Plutarch’s work, it seeped out of Arrian’s book – the only one who wasn’t in awe of Alexander was Aristotle. Therefore, I needed a woman time traveler. And I needed someone who wouldn’t be cowed by him and someone who would fascinate him. It wasn’t hard to create the woman – what surprised me was how fast she fell into his arms. Well, it would be a romance book, then. But love isn’t easy to write about, so they fell in lust first (that’s more understandable). Love came slowly to this mismatched pair; the man from the past  and the woman from the future had a lot to overcome before their relationship could be based on mutual trust and understanding. And for that, she has to tell him who she truly is – not Persephone, goddess of the dead, but a woman from another time.

He’s impressed – of course, and all the more so because he realizes that what he’s doing will be in songs through the ages. Heady stuff, for a young man. So the book advanced, and as I wrote, I researched. The army, their route, their food, their weapons, his friends, his enemies, the weather, the horses…and toothpaste. I spent an entire day researching toothpaste. Did you know that people brushed their teeth very carefully back then? Clean teeth and sweetness of breath was considered essential. They used soft twigs, chewed until they frayed, or little brushes, and they had homemade toothpaste. So, herewith for your tooth brushing pleasure is the recipe for toothpaste circa 500 BC (it didn’t change much for a thousand years…): Heat snail shells in the fire until they are white and grind them very fine. Add gypsum and honey, and grind into a paste. Add essential oils of mint or other herbs for taste. Other recipes included chalk mixed with wood ash and fresh urine (as opposed to pee that’s been sitting around all day…) and sea salt mixed with pepper and powdered cloves – guaranteed white teeth, fresh breath, and bloody gums!

Research was important to me because I wanted the reader to feel as if they were immersed in another time and culture. Ashley feels disconnected from reality but it’s the small details of everyday life: how bread was baked, how prayers were said, how the soldiers bathed (her favorite part of the day) – that anchors her to her new surroundings.  Hopefully, the reader will feel the same, not looking back across a chasm made of thousands of years but actually living, walking, and riding at Alexander’s side. 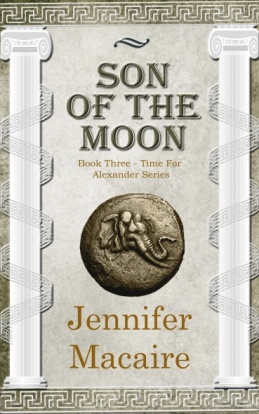 Can you face the consequences of cheating the Fates?
Alexander the Great journeys to India, where he and Ashley are welcomed with feasts and treachery.
With their son, Paul, being worshiped as the Son of the Moon, and Alexander’s looming death, Ashley considers the unthinkable: how to save them and whether she dares to cheat Fate?

The first two books in the series are The Road to Alexander and Legends of Persia.