Ahhh, zee French elections! They have passed, and the winner has been crowned (the French are still a monarchy at heart), and most people have breathed sighs of relief (or disappointment) and moved on. Most – but not all. Imagine my surprise to find my youngest deep into politics and Getting Involved! You must understand that we are a family of non-involvers.

Well, most of us. Now that I say this, I can remember my mother going on strikes, my father deeply involved with his Union to the point of becoming its treasurer – and so my family of non-involvers actually means me and my husband. We look on, (probably with expressions of mild surprise) at the world going on around us. Then I go back to my drawing and writing, and Stef gets his golf clubs out of the closet (or his boots and hat) and heads to the Great Outdoors. Neither of us has the slightest interest in meeting the mayor, listening to politicians, and painting signs for marches. We vote – after careful (and quiet) thought. I have been known to pen the political diatribe now and then – and I do take an interest in politics – as long as I don’t actually have to get involved more than putting an X in the square in front of my candidate’s name.

But not my Bolshie daughter – who threw her heart and soul into this election and impressed me no end. I admit to admiring her. I truly thought her candidate would have made an enormous change in French politics (Melenchon) – he was the far left candidate and his ideals were just and good. He lost – and my bolshie baby was astounded. How could he lose? Everyone was voting for him! (She informed me.) There must have been cheating, there must have been fraud – she hissed like a tea kettle – she was angry and disappointed. But I admired her passion and her fire. That’s always been missing in me – that passion and the ability to get involved.

Well, I got a parking ticket the other day.  I have been parking in the same spot for five years. We have parking spaces in front of our apartment and there is also a cross walk. But the parking spaces are painted over the zebra crossing, so no one minds and everyone parks there – until the other day when I got two tickets in the mail for a grand total of 150$. I was flabbergasted – furious- and taking example from my daughter, I first wrote a letter protecting the ticket, then I marched down to the police station to complain. I took pictures. I met with the three police who gave out the tickets, and I showed them the pictured and told them I was not paying, that if they didn’t want people to park there, they would just have to erase the parking lines. I was polite, but firm. I told my daughter I’d actually gone to the station. She was impressed. Then she borrowed my car to go see her horse.

Tonight, when I walked the dog, I noticed where my bolshie daughter parked. Right on the zebra crossing, in the middle of the parking space that spans it. My little car. All alone on the street – there is hardly anyone around. Except my car. On the “who knows” parking spot. If I get another ticket, I’ll have her write the letter for me. She can get involved.  (Below is a photo of the offending parking spaces – there are 3 of them on the zebra crossing. So silly!) 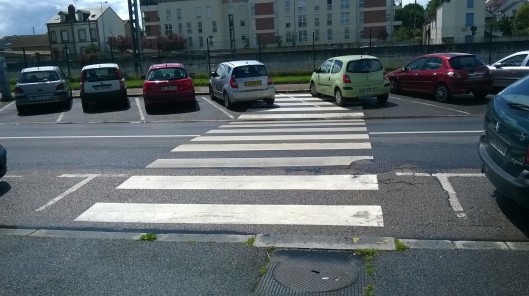