Look, if you liked Beauty and the Beast – read no further. I’m not here to argue, to burst bubbles or to make young children cry. I’m just going to explain why a certain movie (Beauty and the Beast) did not work for me. I liked the cartoon version fine. It was cute and the music was terrific. I adored the old black and white French version by Jean Cocteau with Jean Marais and Josette Day – the atmosphere was perfect, the costumes gorgeous, and the setting was creepy/gothic/fantastic.

The original story is an interesting fable. And then Disney got it – and transformed it – much like the Beast was transformed from an ugly beast who was prone to stalking and creepy spying behavior …

Into a handsome prince.

Except for Disney, the transformation was backwards…The Beast went from a furry, cute, adorable teddy-bear monster into a sort of zombie-dead-eyed prince. But that wasn’t the worst thing about Disney’s transformation. Somehow, they got the idea that Belle had to represent Liberated Woman Everywhere, and she became a Modern Woman Intent on being Free. Are you starting to see the problems with this? But wait – there is more. In order to appeal to everyone, they took the cartoon and made it come to life, and made each character into a cliché so that people could Identify with themselves. There was Belle, the young modern woman trapped in a provincial, small stuffy town with No Books and No one Understood her!  There was Gaston – and I’m not sure who was supposed to identify with him, but he’s a brash, bragging, conceited hunk who can’t understand why Belle doesn’t fall into his arms… Maurice is Belle’s father. He’s the absent-minded widower who only wants the best for his only child. LeFou, who in the cartoon, was a buffon enabler for Gaston, and in the film he’s the gay buffon enabler, who sighs over his hunky friend and is ignored in return. There are the magical furniture pieces – each one more annoying than the other. And there was the setting, which, instead of being fantastically gothic, just looked like a Hollywood set that had been left out in the snow.

So, here is a story about a woman who is held prisoner, who falls in love with her captor, and ends up a sort of princess complete with fancy dress and chateau. May I hazard the guess that if the Beast had been a poor woodcutter and Belle forced to live in a hovel and dressed in rags – she would not have stayed? Money, it seems, can buy anything, including forgiveness.

But let’s backtrack to the beginning of the film, where the characters are dancing and singing in a village the size of my small apartment. I got claustrophobic – the houses crammed together, the people three or four in a doorway, just their heads sticking out, the tiny streets, never more than ten inches between anyone at any given moment – a bustle of packed sardines, and the camera work was lamentable –  showing legs and feet. OK, hitting you over the head with subliminal messages: this town is too small for Belle! She has to escape! Well, bully for Belle. Her father leaves on an incomprehensible trip and gets lost (decidedly no one Ever leaves that small town…) and ends up in a chateau where the Beast imprisons him in a (in what?? It’s a jail cell in the middle of a staircase – why not the basement? I never got this part!) Belle finds him somehow (the horse is the most intelligent thing in the whole movie) and because her father is ill (coughing – a sure sign of illness) she exchanges her freedom for her father’s release. I can understand this part. Already, the staircase in the castle is twice the size of her whole village, there is not a crowd of thirty people breathing down her neck, and Gaston is not preening in the corner, telling her what a great little wife she’s going to make. Hell, I would have stayed too.

But instead of a cold bare cell she gets a fantastic room with talking furniture and some new clothes. The food isn’t bad either. And the beast is cute. He’s fuzzy. He’s like a whiny little kid who is cute, and you know that with  a couple smacks on the butt he’s going to be just fine, so Belle after showing how independent and intelligent she is, oh, and Humble – she won’t dress in fancy clothes – but despite all this, she falls in love with him. All it takes is him saving her from the wolves (when he was the one that scared her out into the forest in the first place) So there you go – Women’s Lib 2017.

OK, I admit – there is more to the story: some magic mirror, and a sob story about her dead mother; and her dad tries to rescue her; and Gaston is a jerk to the end (these types never change, girls – don’t fall for them); and everyone (except Gaston) is saved by the only real liberated woman of the story: the  enchantress who turned the zombie, er, prince into a Beast in the beginning. If there is a hero to this tale, it’s the sorceress. The end.

(I walked out before the ending – so I’m only getting the end from my daughter, who stayed. But there you go – I’m a modern woman who really has no time for such tripe. I’d rather watch the original tale where there is no women’s lib and the story is just as creepy,  politically incorrect and horrid as it should be.)

PS – What happened to Emma watson? She seemed to be sleepwalking through the film. I think I saw three expressions on her face. Pained amusement, boredom, and worry. The rest of the time, her face was curiously blank. Perhaps she realizes the trap she’s in – a story about a woman succumbing to Stockholm syndrome – helpless to resist. 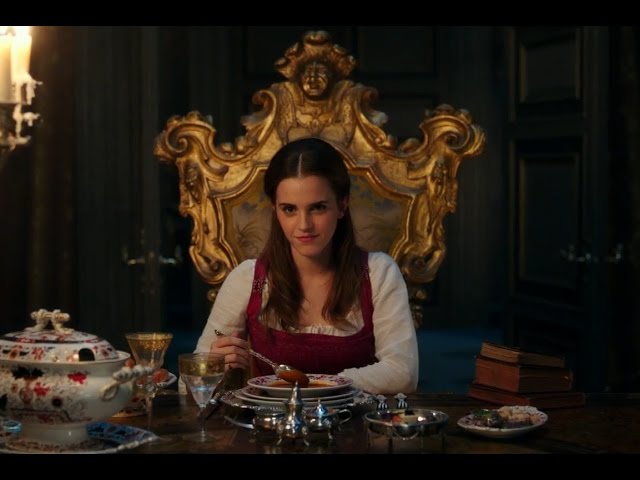