I love Argentina – it’s a wonderful country.  My husband and I spent our honeymoon there, and we went back several times – each time was magical. That’s why, when I saw this book was set in Argentina, I didn’t hesitate to buy it. It lived up to my expectations – it was fast-paced, fun, thought-provoking, and I learned much about Argentina’s history.  If you like spy stories (think James Bond!) and history,  a dash of romance, and lots of adventure, then this book (based on a real person!) is for you. 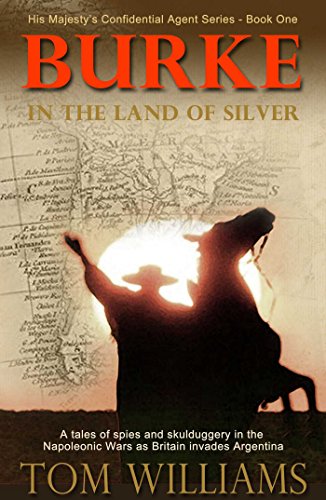 e in the Land of Silver, by Tom Williams.
A fantastic historical novel set mainly in Argentina during the Napoleonic wars. Burke (James Burke!) is a spy for the English who doesn’t hesitate to work for what he feels is right against a background of war and greed, as gold and silver are used to fuel the huge war machines of the three great powers of the time: England, France, and Spain. “Burke in the Land of Silver” took me back to a country I love, Argentina, and I learned much that I didn’t know about its history. But mostly, I followed the fascinating adventures of a gentleman spy caught between three warring countries intent on sacrificing their young men in order to gain wealth and power. The book was wonderfully researched and fast-paced. I couldn’t put it down, and I’m eagerly looking forward to reading the next books in the series.
Link to the series at the publisher, Accent Press.
Questions for the author:
Me: What made you choose James Burke as a character?
Tom:  After I wrote ‘The White Rajah’ my agent (yes, I did briefly have one) said that I needed to write something more accessible as a first novel. He wanted it to be historical. So I was looking for possible story material and I mentioned this to friends, including an American woman I had met in Argentina. She said that there were lots of potential stories around Europeans who had been involved in the opening up of that country, so I started reading around the period and came on some references to James Burke. He sounded interesting, so I tried to research him. The only thing I could find in English was in an Irish journal. (I’m pretty sure there is a reference in the Historical Note at the end of the book, which answers some of your other questions too.) There is other stuff, much of it in Spanish, which I don’t read. Anyway, limited as it was (he was a spy so we really don’t know that much) it gave the basis for the story. The outline of the tale is all true. He was almost certainly the lover of the Viceroy’s mistress, the Queen of Spain (but so were half the court) and the Princess in Brazil. He did spy in Argentina and help the British invade. The British fleet was guided up La Plata in fog by a local pilot, though the details in the story are entirely fictional. The details of the invasion are pretty accurate as are the politics. We were ‘liberating’ Iraq at the time and I was very struck by the way in which we told the people of Buenos Aires that we were ‘liberating’ them. I’ve seen the proclamation (in English and Spanish) in a museum here. The details of the defeat of the British are entirely fictional, though they were firmly defeated
Me: Had you been to Argentina before you wrote the book?
Tom:  Yes, as you can see from this, I have been to Argentina before. Far, far too often. I really did ride through snow in the Andes because I wanted to know what it was like. Cold. That’s the answer. Very, very cold. But staggeringly beautiful.
Me: What is fact and what is fiction in the story? (Note: There is a list at the beginning of the book identifying the real people.)

Tom: The events in Spain all really happened, though Burke couldn’t have been in Madrid for the uprising. The timings are out by a few weeks, but I cheated. It’s too good a story and the details of the attack on the coach are true.

Wellington really was preparing an army to invade South America. The decision was made to divert it to the Peninsula, thus arguably changing the course of world history.

De Linears was a real person and I suspect deeply unpleasant. He was pretty certainly a duplicitous bastard, but details of his duplicity are imagined.
Burke did go to Argentina. He did work alongside a Mr O’Gorman, he did seduce Ana, he did cross the Andes and explore Chile and Bolivia, he did aid the invasion. The plot outline is essentially all true.
The part  with de Linears (real person) is made up, as is the British defeat. (They were defeated but not like that.)  And Burke really did run off with Ana, but they split up before he got back to England.
Me: I loved the character – he’s so romantic, idealistic, (yet not naive), and he’s got a very strong moral fiber. I can see where that makes it hard for him to follow certain orders or remain loyal to what he sees as a corrupt system. Is this how you wanted to portray James Burke? What ideals do you want to convey with your hero?
Tom: I see Burke as someone who was desperate to be accepted as a gentleman and who wanted to succeed in life. He wants to be ruthless and get ahead, but he is handicapped by a fundamental decentness. I wanted a hero who is romantic and brave and all the other things but also a bit of a chancer and an appalling snob. There’s more than a touch of Fleming’s Bond about him.
Me: I see that! It’s exactly what I meant. Thank you so much, Tom for chatting with me!
A note to my readers – Tom Williams was in Argentina as I wrote this, and very kindly took the time off his vacation to answer my questions!