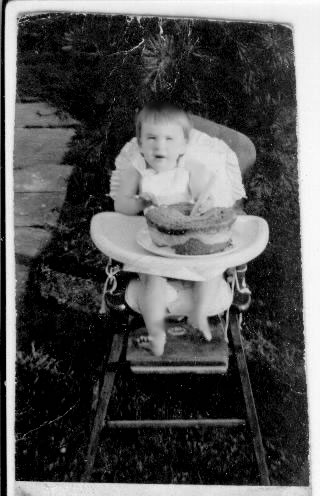 I told a funny story about my sister Julie yesterday (strange, none of my family are speaking to me today…) So I suppose it’s only fair to poke fun at myself as well. As you can see from the picture, I was an adorable little sprout, with crossed eyes and a club foot – but those things sorted themselves out – and thank goodness for our family dentist, who managed to tame my teeth into some semblance of an order, else I’d look like a sabertooth tiger (honest).

Well, I was kind of a nerd, even when I was a baby, and the next door neighbor would come over and pick on me. (He must have been about 3, so don’t go thinking child abuse -) anyhow, he would pick on me, I’d cry, and my mother decided she didn’t want a wimp for a daughter and she would teach me self defense. She got a big cardboard box and set it up on the lawn, and taught me to box. I was the karate kid  – I kicked that box, smacked that box, shoved that box, jumped on the box, smashed the box, boxed the box  – my mother honed my skills until my tiny fists were deadly weapons.

“So, when that mean boy comes over to pick on you, what are you going to do?” demanded my mother.

I looked at her straight in the eye (as much as my crossed eyes allowed) and said, “Hit the box!”