The story of Kalin des Vents

He was a promising colt, but on the small side, and for that he was gelded and sold as a two-year-old. His grandfather had been a racehorse who’d won several big races, but his first crop of foals turned out to be better at jumping than racing, and one did so well he became a choice for breeders looking for docile stallions to cover their showjumping mares. His mother was one such mare – she’d won several grand prizes then was retired for breeding. But her first foal, though flashy, was considered too small for show-jumping, and a young woman who had just started eventing bought him.

The next three years of his life were spent being trained for three day eventing. He learned dressage, jumping, and cross country jumping. He wasn’t particularly brilliant – what the French would call a ‘craque’, but he was willing and enthusiastic. He liked dressage and breezed around the cross-country course in race-horse style, and when he was five he became French vice-champion three day eventer and began training for an international career. But the day before he was to go to England he stumbled during an exercise session and pulled up lame. Carol, his owner and rider, saw with a sinking heart that he’d bowed his left front tendon.

When a horse bows a tendon, it can mean the end of its career. Now, new techniques in veterinary medicine exist. His owner decided to treat the tendon with stem cell therapy, and so began a long and painful interlude in the horse’s life. For six months and twice weekly a burning fluid was rubbed into his leg. He became irritable and skittish, and soon he was considered high strung and unpredictable.

When he was able to get back to work, he seemed better than ever, and Arthur, a young amateur rider whose father had been a professional event rider, started training with him. But a few months later, halfway through a cross country run, he became lame. Again the vet came and this time the verdict was harsh – he would never be able to compete at his former level. His owner, faced with the prospect of either euthanizing him or keeping him in a pasture for the rest of his life decided to put him in a small paddock to see if he’d recover, and there he stayed for nearly a year until chance once more looked his way.

His owner became pregnant with her second child, and finances were tight. Her vet told her that the horse could now be ridden, but not in high level competitions. Hoping for the best, she asked the riding instructor at the pony club if she knew any young riders looking for a well trained horse for light work, and maybe some jumping. That very day, one of her student’s mother told her she was looking for an inexpensive horse. It was serendipity. The horse’s owner knew the girl’s family – knew they were horse people and would take good care of her horse, and so she agreed to sell him. The buyer was me, for my daughter Julia, and the horse was Kalin des Vents.

I first saw Kalin in his stall. He was thin, his muscle tone was gone, and he hated being cooped up. I think I fell in love with him at first sight. He had such a worried, sweet expression. Horses have vastly different personalities. They are more subtle than dogs, but anyone who knows horses can tell you that they each have distinct personalities. Some are timid, some are gregarious, some are curious, and some indifferent. Some are quick to learn, others need more time, and some are just contrary. A horse’s intelligence can’t be compared to a dog’s or a cat’s. Although they’ve been domesticated for centuries, they’ve still kept a great deal of their wild instincts. Their sheer size and strength makes them dangerous, and they can be unpredictable. A good rule of thumb when working with horses is never let down your guard. Never fully trust a horse, no matter how well you know it. At the same time, when you are riding, you have to trust your horse. You have to be confident the horse won’t shy, stop dead, rear, buck, or stumble and fall. When you compete with a horse, you are a team. In eventing, you are partners in dressage, which is like ballroom dancing, and then you show jump, and then you go around a cross country course, which is the most dangerous sport a horse and rider can do. Even polo isn’t as dangerous. So, horses are a paradox. You must always be on your guard, but at the same time, you must trust him with your life, especially when you’re galloping across an open field, about to leap over a four-foot jump made of solid logs. When I saw Kalin, I knew that he was a horse you could trust.

I don’t like going into stalls with horses. In close quarters, their reactions can be brutal, and it’s hard to avoid a kick or bite. Some horses get nervous when strangers enter their stalls – their stall is often their only refuge, and they feel insecure when their space is invaded. But if I was going to buy a horse for my daughter, I wanted to feel secure about her handling him. So I went into his stall, ran my hands over his neck and back, scratched his belly, lifted his feet, and patted his head. He stood quietly, and when I snapped his lead on and led him outside, he was calm and respectful, not pushing past me to get out the door. Again I picked up his feet, led him around, and looked him over. He looked back at me. I don’t know if he sensed my interest in him, but before I put him back in his stall, he nuzzled my shoulder, as if to say, “I like you”.

“He’s complicated,” she replied. “Julia will learn a lot from him, but she has to be careful. He’s not like the ponies she’s used to riding.”

He was complicated. He was skittish, and hated meeting another horse in the riding ring. The first time Julia rode him, he shied and skittered across the ring, nearly unseating her. He carried his head high, he didn’t respond to her leg, and he ignored her attempts to gather him and settle him down. In a lot of ways, they were perfect for each other. Kalin had been ridden by only two or three people in his life. Suddenly, he’d lost his beloved owner, his leg had been hurt and the treatment painful. He’d always been high strung and jumpy, and all this made it worse. He had never been in a pony club class, or surrounded by boisterous children. He had a reputation of being difficult.

When Julia saw Kalin for the first time, he’d been in a small paddock for nearly a year after bowing his tendon twice. There was still a thickness in the tendon, but he was sound, and only eleven years old. Because we wanted it to be a surprise, we didn’t tell her we were going to buy him. We sent her to his stall to get him for her lesson, telling her it an owner’s horse, and he needed some exercise. Because of his poor condition, she thought he was an old horse, and since he hadn’t been ridden in a year, he gave her a hard time. After the instructor had yelled at her for the third time for missing her transition from a trot to a gallop, started to cry. But Julia loved difficult horses. The trickier the better. Even though her hands were blistered from the reins, face was red, and tears were streaming down her cheeks, when her father mentioned he might be for sale she threw her arms around his neck and declared, “I love him!” 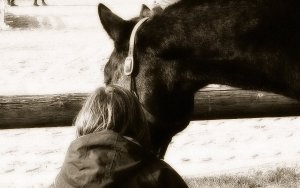 Here is the blog post from the month we bought him.