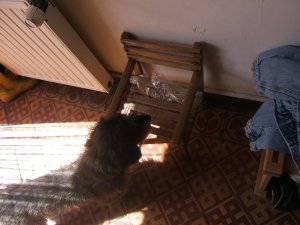 Auguste, the water bottle, and the baby chair.

Auguste is really a baby – he’s just two and a half, so it’s normal he has a bottle.

Actually, his favorite toy in the whole world is an empty water bottle, so when we get one, we always give it to him. He chomps it nearly flat, and carries it everywhere with him. He hides it, outside and inside. Inside, he usually shoves it under his doggie bed, then complains when Rusty (our Lab) lies down on it and he can’t get it. Outside, he puts it carefully under a bush or just behind the stairs.

One night I found it in the hallway, and I picked it up and put it on a baby chair we have under the coat rack. (The chair usually has a pair of shoes on it, but that night it was empty, so I put the bottle on it.) The next morning, a frantic Auguste woke up and rushed out of the kitchen to look for his bottle. He saw it on the chair, grabbed it, and pulled. The bottle got stuck on the chair’s arms and wouldn’t budge off the seat. Auguste tried and tried, but the bottle was stuck. So like a baby, he sat down in front of the chair and cried. “Whooo hhoooo hoooo”.

My husband and I came to see what was wrong, and to show us, Auguste grabbed the bottle again and pulled. It stayed stuck. We started to laugh. (Dogs hate when you laugh at them.) Then my husband reached down and turned the bottle so it was pointing out, and you could just see the lightbulb going off in Auguste’s little skull. Now he works the bottle around so that he can pull it off the chair.

Right now he’s sleeping with the water bottle tucked under his chin like a pillow.